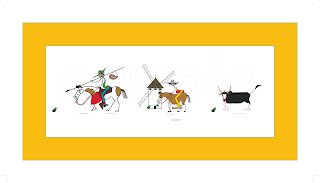 I met a man at a thing and his name was Mr. Bacardi and he was as cool and interesting as the night in question: a piece of dready art had been auctioned off much earlier in the evening and he had been bidding against a woman whom he graciously allowed to have the floor, but afterward while I sipped his rum and we chatted, later he asked me to do a piece for his wife …

he liked Don Quixote, don’t we all, so I did a piece called ‘Following Quixote’.
This year I did another dready, this time for the Bacardi Corporation; a dready art representation of their Bermuda Headquarters building … that knocked my socks off on many levels, one it was a great piece of art and two that Bacardi chose dready … and three I moved completely away from the purely ‘Caribbean’ aspects in this dready and just did a cool, fun, bright, comic piece of art.
hail the man!