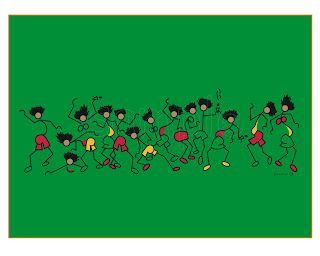 dready started out very simply. It was dready characters on coloured backgrounds … often just off white … very faux primitive – I say faux because I’m not a primitive or an intuitive

the idea was the creation of post cards and T shirt images for the caribbean. dready was conceived as art on a shirt … art that represented a caribbean or west indian cliche in a humorous way … something that would make tourists smile and want to take one home.
the image on the left was called Bashment. I first formally drew Bashment in feb 1998 and called it ‘dready jam’ … I love the character 3rd from left and the way ‘she’ is standing …
it’s funny how much ’emotion’ you can convey in a stick figure just by a tilt of the head or the position of an arm.
walk good