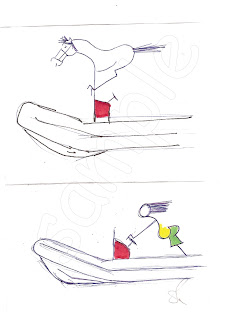 What took you so long?

I drew this concept for Chukka Caribbean on 4 small pieces of paper from a note pad and I drew the first ever concept for them on a napkin at my sister’s dining table in Victoria, BC, Canada, in January 2005 … dready shirts (this one’s for their Ocean Safari tour) went on to be the best selling shirts at Chukka Cove, by far … the point is, I think, that from simple beginnings bigger things arise and that each thing in its own time …
And although Chukka Cove haven’t bought any new dready shirts since 2008 (tourist business is very weak) dready art has been growing along and it seemed appropriate to find a way to show that evolution and growth.
websites historically are static beasts … so here we were at this sort of crossroads, as we thought about how to make www.dreadyworld.com more relevant to what dready had become, less static, more interactive and kind of ‘organic’ the idea of a blog, that would later become incorporated into the new website, seemed to answer the question … so here we are … now!
Live Love Life