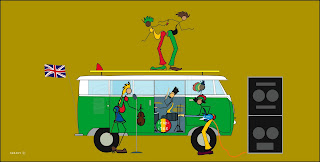 Someone said after seeing this image that Dready had “left the shallow end of creativity for the paddling pool of commercialization [sic]”; that I’d left the unique simplicity of dready’s early beginnings for something less unique and more commercial.

The first incarnation of this image, seen somewhere below, was simply the bus against a coloured background; to which someone said – “it doesn’t say anything to me, it needs dreadys in the bus [sic].”
Me, I think that either as the Vdub bus alone or the band and the bus; either evolved, evolving or still just too unique to even be in the pool, it is, absolutely, positively, one of the coolest pieces of dready art I’ve ever done.
… and as to commercialism …
man gotta eat!