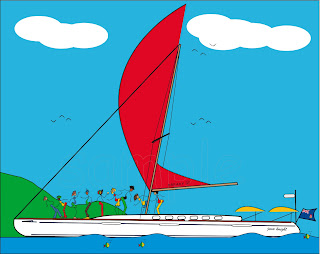 talking about boats … this image of Java Knight was done to commemorate java’s pineapple cup voyage in Feb 2009.

I went down to Jamaica for the prize giving at Montego Bay Yacht Club, dready don’t like to miss a party where the rum … and the women … might be free. I saw some friends while I was there; nodded at a few.
the commission tested me, as it was difficult to coax that hull’s shape out of what I began with … but it taught me to start to think about the end result when I made my first mark on the paper or the screen for that matter, to visualize what I was going to do.
free yu mind!