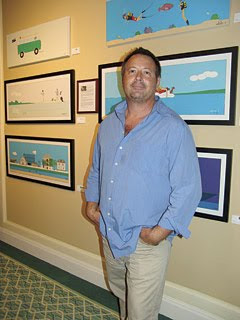 By now we’re all familiar with dready art, but in the CTA’s Elevations art show, on until the end of February, we see a new dreadyness emerging. Except for a singular appearance in a very cool green and perfectly realised VW Combi Bus, the show is bereft of the usual stick figure dready. The colours, the tone, the style, the whimsy are all there but the characters that appear are all filled out as are the elements of life, the cars, the boats, the buildings; all slightly comic versions of their reality. That said you’d spot them all as dready art the minute you laid eyes on them

“The show was called Elevations, so I included ‘architectural’ elevations and what I wanted to describe as ‘elevations’ in the dready style; the filled out characters were part of that elevated style,” Shane explains.

The filled out characters are inspired it turns out by dready designs for the new Active Capital/Dart Enterprises business Caribbean Canvas Company; a Caribbean active lifestyle clothing company set to launch in February of this year. CCC is the brainchild of Hugh Treadwell who invited Shane to do a series of dready for CCC designs.

“Hugh wanted a dready of Caribbean Canvas Company’s own, something ‘more’ really and the end result was six active lifestyle designs with more evolved dready characters. The Bone Fishing dready in the Elevations show for instance and the Divers with Grouper are both part of that series. The Girl on Jet Ski is also an off shoot of that.” Shane advises. “I loved doing these and I love the end result; a kind of new dreadyness.”

As to architectural elevations; there are ‘elevations’ of the yacht Octopus and of the aforementioned VW combi-Bus but there is one truly unique panorama of famous buildings of the Cayman landscape; starting with the West Bay Fish Fry and ending with the Mission House in Bodden town; it’s like a West to East two-dimensional slice of Caymania.

“You have to see the dusk sky in the Octopus piece.” Shane adds. “It’s purple, but it’s the Cayman panorama that I really like and I’m planning, at least in my head, versions that go further East.”

He continues: “I just wanted to add, because it’s an important step in all this, that this is the first time that dready prints have been done on island, the art for the show and the subsequent prints sold were all done at Picture This, from printing through matting, stretching and framing.”