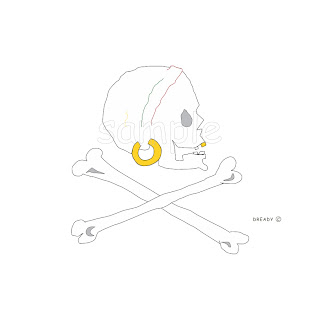 Port Royal, a buccaneer port in Jamaica became one of the wealthiest ports in the world. a privateer, Henry Morgan became governor of Jamaica.

every year, in November, the Cayman Islands celebrates pirates week, beginning with the pirates landing and the symbolic capture of the governor and then setting off on a week of festivities and cultural district days to celebrate a small part of its history as a place where privateers came to stock up on rope, turtle and water and careen and clean their boats

i first did the dready pirate skull and cross-bones as part of a pirates week design, it was on a flag in the art … it has red yellow and green lines in the skull, a nod to rasta colours (african colours) that are always a part of the Caribbean theme, an indication of the important role west africa has played in the history of the americas … and a gold tooth and earring for an extra bit of whimsy …

is a very simple but cool design. i want to use it on surfboards and skateboards.