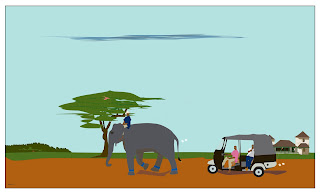 two things i’ve been dying to draw are, an elephant and a piaggio style motorized rickshaw ..

and i managed to get them both into this one image that i am doing for someone i know … his family originates from sri lanka but he has grown and lives in uk.

they ain’t no elephants in the caribbean, well dat’s a lie, there are some in zoos, but none in real life … but i’ve ridden one, max and i and it feels as if you’re ‘superior’ to everything else around you.

it took a while to get this image going in my head; i kept thinking of his english life and then i thought that perhaps, like me, he might still have his soul in some more foreign place – the way jamaica still broods in the back of my blood.

i like the colours, warm and reflective of the place. i like the fact that all three characters are actually ajith … i like the nod to dreadyness in the red green and yellow beads on the elephants tail, at the back of the rickshaw and in the chicken off to the left rear of the scene.