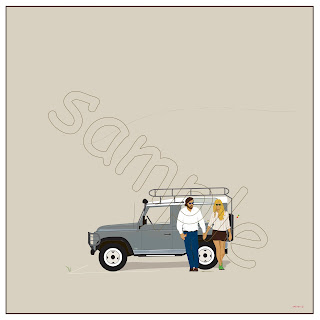 land rovers keep cropping up in dreadys because they were such a big part of the landscape of my youth, and still promulgate in the vernacular of my adulthood …

I have a 90 right now; she’s lovely, she’s old, but that’s kinda my thing; there’s a couple of persian carpets lining the floor in the back, the diesel engine makes a delicious noise, the gear box is tough, the ride is hot … it’s all idiosyncratically cool.

I used to have a series III, long wheel base, ex mod, canvas top, windows that slid instead of wound; it died 10 years ago, in hurricane ivan, drowned, its every orifice filled with sea water – I could often be seen driving down the road, the canvas sides rolled up, me holding the door open to let cool air inside …

there were land rovers at goshen, geoffrey had one at paddocks, uncle richard and aunty betty had betsy – I drove betsy, a short wheel base series II, to grass piece to cut grass – drove her to kingston and watched cyar dem scatter out of my way when she clattered down the madness of half way tree rd.

my father took chevys to belize; suburbans and blazers and pickup trucks … but the british army drove land rovers; not for them the soft american rides.

so land rovers have scattered the roads and works yards and junk heaps of my youth and young adulthood; worn and faded, battered, some times even broken, and still running … I have a thing for them.