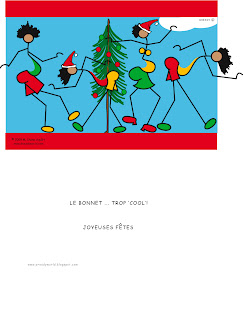 Tis the season to be jolly ... 'en francais'!
dready speaks french, who knew ... but the truth is you can't make new friends unless you speak their language, whether that language is french, spanish, italian, german, malay, sinhalese maybe (because we just tested an image for Singapore); russian, 'da da nyet nyet, da!' ... english or patois.
I like this image, in french or english ... the character on the left seems to have suddenly realized that we are out here, looking in at dready's world; it's not quite a look of surprise, but one of interest ...
trop cool ca!
‹ Previous Next ›